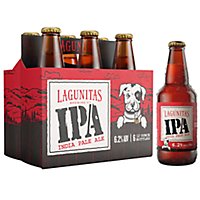 Say hello to Lagunitas IPA, the gold standard of our hop-forward approach to brewing. Our original and flagship IPA, Lagunitas IPA sent us down the path of brewing edgy brews. This highly balanced and super drinkable malt beer was dreamed up in California 30-odd years ago amongst the redwoods, rugged coastlines and rolling hills of Sonoma County. It's West Coast IPA all the way. It's also so doggone good that it's now brewed from Petaluma to Chicago and beyond. Yet, somehow, this particular IPA found its way into your reality at this very moment. Whoa. Life is uncertain, don’t sip!

Say lah-goo-knee-tuss. Ruthlessly delicious. There are only a couple of things in this life better than opening up a fresh box of hops. One is drinking the beer it later becomes and the other one isn't. You know what the other one is. You know why - I ain't gonna tell you why. In the course of brewing a 500 barrel batch of IPA-from the kettle hops to the dry hops-a brewer gets to do that box opening thing 14 and 1/2 times - Now, this may be a stretch, but if you did the other thing that many times, you probably wouldn't be able to walk. Probably. So you'll understand what we mean when we say that, under certain circumstances, brewing really is better than, well - you know - So: Life's Uncertain, Don't Sip. It speaks, People Mumble. Obey the Buds, and Come visit us sometime! Cheers! Beer speaks. Wanna try a - way smooth and silky - Lagunitas: A Little Sumpin' Ale - or maybe a hazy and bright - Lagunitas Hazy Wonder - whatever.